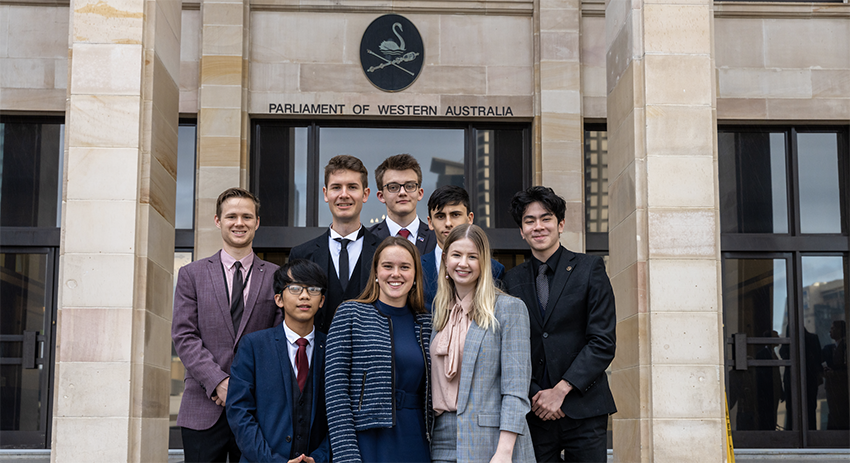 Taking in the awe of sitting in the Legislative Assembly while awaiting her turn to start her first speech, Carramar Year 12 Tegan Shirdon relished the opportunity to be part of the WA YMCA Youth Parliament program this year.

Tegan was chosen from a competitive field of 15–25-year-olds to participate in the annual program which included acting as the Youth Shadow Tourism Minister and delivering her Private Member’s Statement to fellow politicians as Youth Member for Joondalup.

“It was an absolutely amazing experience and I enjoyed every element of it,” Tegan said.

“We stayed in the city for a week, having three days in Parliament House, two training/workshopping days, and visiting Government House and Council House on the final day,” she said.

“It was definitely a challenging week, as parliamentary sitting days were full on with numerous speeches and debates across the sitting. Most times, it would involve writing speeches on the day and in the chamber - having to stand up and present these in front of MLAs and MLCs was a little daunting, but overall, I love a good challenge!”

She said meeting WA Governor The Hon. Kim Beazley was a big highlight of the experience.

“He had some really interesting points to talk about, including the future of Australia in the Commonwealth, as well as his own experiences as Leader of the Opposition and Ambassador to the US.”

The other major highlight for Tegan was debating in the chamber, getting to experience the reality of life as a politician.

“Particularly the Tourism Bill (to which I was the Shadow Minister), and the adjournment debate on the last day.”

“The Tourism Bill was one that the committee and I had worked hard on for the past few months, so finally getting to propose that and debate its components against the government was a great experience.”

“The Bill passed, so it made all of the efforts absolutely worth it! The adjournment debate, where each member was able to speak for 1.5 minutes on any topic of their choice was also fascinating to watch and take part in.”

Tegan was inspired by the WA YMCA Youth Parliament experience and is keen to apply for future programs.

“Someday I would love to be involved in politics and this experience gave me so many new connections with existing MPs and other like-minded young people.”

“Getting a chance to publicly speak on things that I was passionate about was a fantastic learning experience, and I believe it has given me a lot more experience in unprepared, unscripted debating - a very useful skill!"

“I would absolutely love to apply again - this time to nominate myself and run for one of the leadership positions (Premier or Leader of the Opposition). I'd really encourage others to apply next year and give it a go!”

“There's not many chances to speak about issues that you're passionate about with such an impactful audience, and if Youth Parliament has taught me anything it is that there are so many people willing to listen, and there is the capacity to encourage change in the community - we're not too young to do that.”