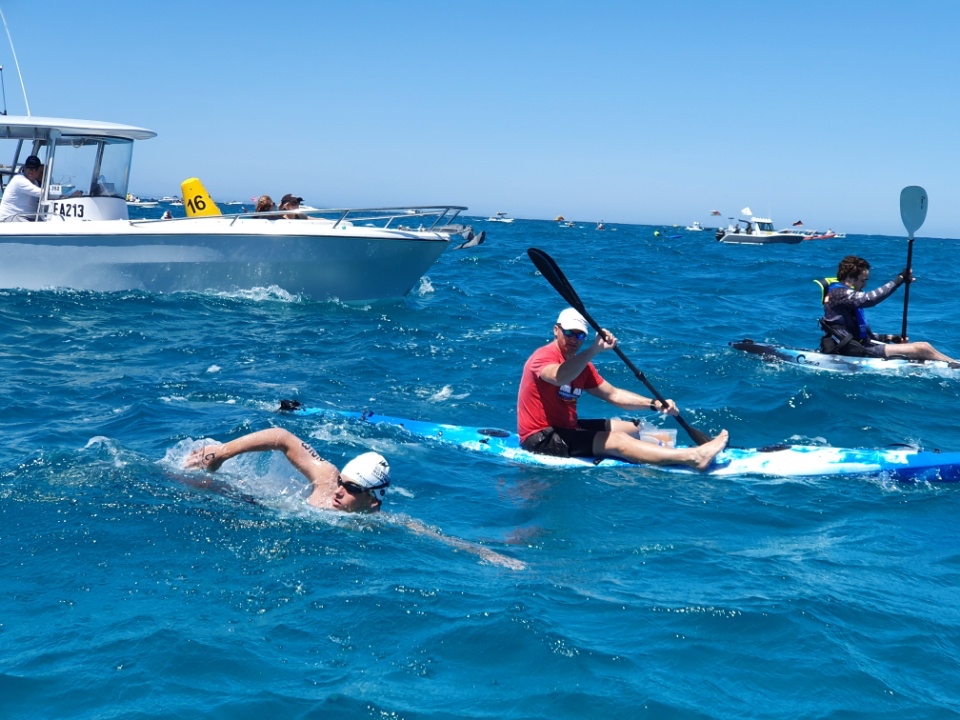 Ollie’s team celebrated a fourth-place finish (5 hours) and Byron Kimber placed fifth in the solo event with a time of 4 hours and 22 minutes.

Despite the gruelling swells and currents, swimmers from the St Stephen’s community all managed to complete the race before it was officially called off ahead of schedule due to worsening conditions.

This year’s race was Ben Pilbeam’s first attempt. He was the youngest solo competitor on the day and finished in 8.18.08.

“It was the hardest thing I’ve ever done but I just had to keep swimming, especially when the conditions got worse,” Ben says.

“It felt great to finally cross the line after 12 months of training. I had my Dad, uncle and family friends on the boat and ski supporting me all the way there as well as some friends and family at the start and finish lines.”

The race was also a first for Matt Richmond, he had competed in a team before but 2021 saw him take to the water as a solo swimmer. He had a few obstacles to tackle during his training period, with COVID and a hip replacement dramatically changing his routines, but he got to race day ready for the challenge.

He says the 27-32km swims and gym sessions he committed to over summer proved worth it on the day of the race, even when conditions changed producing bad swell at the 14km mark. He finished the race in seven hours.

Tiana Brewer was amazed by her team’s efforts and result, finishing the race in just over seven hours.

“I couldn’t even imagine what finishing the swim would look like right until the 19km mark. As we crossed the finish line together it was almost unbelievable that we had just swum 20km,” Tiana says.

She says the adrenaline rush on the day was unlike anything her team had felt before, despite having competed in a number of different races and competitions.

“The conditions were constantly changing. The swell was rising, the current was becoming harder to swim against, but at the same time, it was the best feeling, with your team on the boat cheering for you and your paddler guiding you.”

Tiana and her brother Jed are keen to get back into the ocean to do it all again next year with family and friends by their side.