On track at the Australian Track and Field Champs 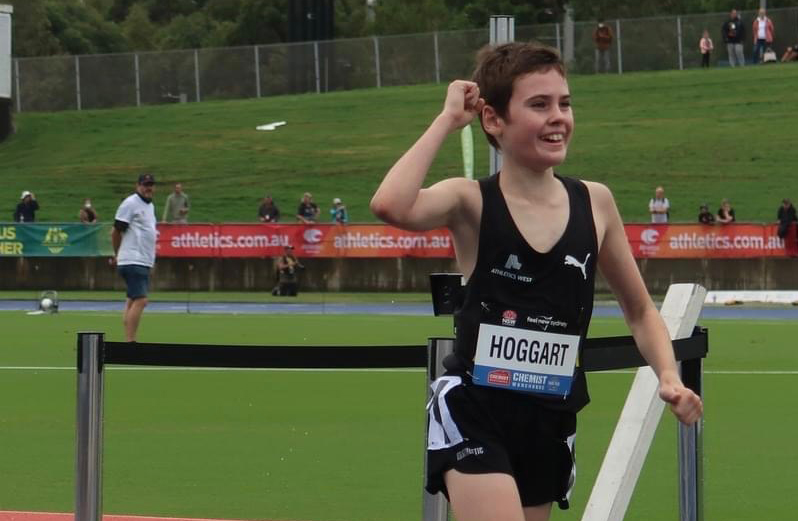 Connor Hoggart’s dream of competing on the national track was realised at the Australian Track and Field Championships in Sydney earlier this month.

The St Stephen’s School Carramar Year 7 student was eager to race against Australia’s best at the competition and was ecstatic to come home with two personal best times.

“I’m really happy with my results and how I went at Nationals. I got two huge PBs (personal bests) in the 800m and 1500m,” Connor said.

He said having his family cheering him on throughout the competition was great encouragement for him.

“My Dad was there taking photos with his camera and Mum was shouting for me. My brother was supporting me on the side with some of my friends who were racing later that day too.”

He was surprised he wasn’t nervous when he stood at the starting line for the first time.

“I felt very relaxed and happy to be standing there with all of the other kids who made it to the championships.”

“His self-discipline, passion for and attitude to training, staying healthy and towards his schoolwork are a credit to him. We are so enjoying being part of this wonderful journey with him, and we can’t wait to see where it takes him,” Mrs Hoggart said.

Connor will take a short break from the athletics track as he heads into cross country season over the next few months. He is aiming to gain a spot in the WA State team and the SSWA State team representing St Stephen’s School. He is also looking ahead to the next athletics season and the chance to try to qualify for the national championships again, with hopes of qualifying for the 800m, 1500m and 3000m events.