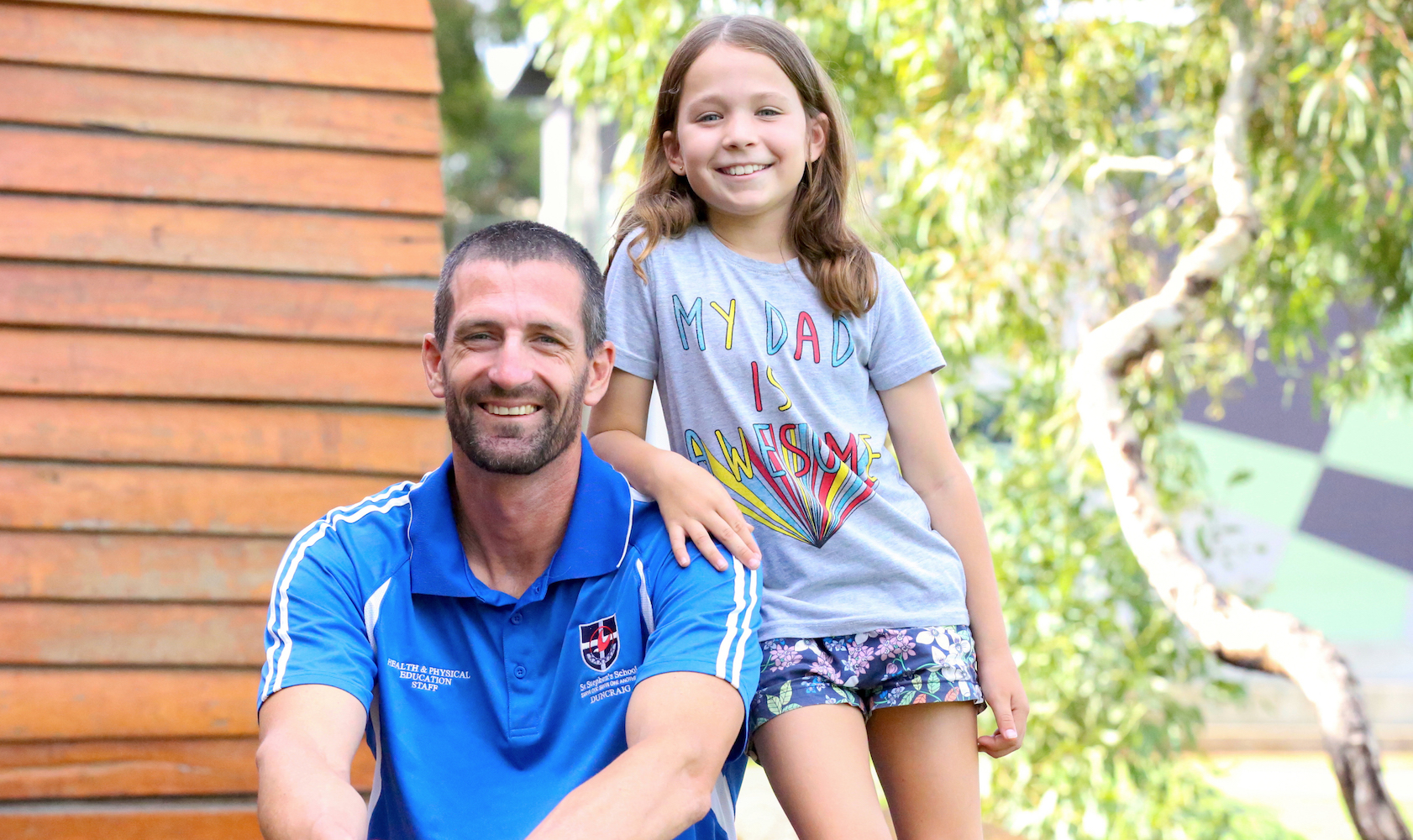 Flo Parker is creative, curious and caring and has a very funny sense of humour. She is the youngest daughter of Duncraig Primary Sports teacher Mr Daniel Parker and, although only eight-years-old, she and her family have an incredible story to tell.

In 2014, Flo was diagnosed with Acute Lymphobastic Leukaemia (ALL) that saw the start of a whole new chapter for her family including many hospital visits, tests and treatment. Daniel recalls the events leading up to her diagnosis.

“We were camping in Dwellingup and Flo was climbing on a rock near the river and fell. She was quite sore for some time and over the next few days it became progressively worse for her,” he said.

“We took her to PMH and the first diagnosis was that she had irritable hip syndrome but a couple of days later she was crawling rather than walking which made us seek a further opinion.

“After a lot of consultation and with more rigorous testing, shadowing was seen on scans in her lower leg bones and blood tests then confirmed that she had Acute Lymphoblastic Leukaemia.”

He remembers the phone call from his wife Marny that confirmed every parent’s worst nightmare.

“My wife rang me at about 6pm after I had come home from work; she could barely speak to me and then she said she was handing me over to the oncologist. As soon as she said that word, I knew it was obviously an issue with cancer.

“I am not sure if I have ever suffered shock before but I imagine it to be like my experience after hearing that news – I became very focused and it was as if the world around me did not really exist anymore or have much significance.”

The weeks that followed included administering a trial drug and a very heavy treatment protocol that works to attack and kill a majority of the immune cells and cancerous blood cells. This weakens the immune system extraordinarily so hospital visits and infection are common.

Daniel said Flo was considered in remission after about six weeks but treatment continued for two years and blood tests and physical examinations for another five years.

The Parker family, including their two older children, Samuel (12) and Lucy (10), are patiently waiting for May 6 next year when, if all results continue to show negative detection of cancerous cells, Flo would be given the all clear.

This has led to him being a big driver behind St Stephen’s School’s involvement with the Leukaemia Foundation’s World’s Greatest Shave.

“Last year was a great success as far as money raised and numbers of students involved – there were seven primary students and myself that shaved our heads on the day.”

St Stephen’s School will hold a special World’s Greatest Shave event on Thursday, April 9 at the Duncraig Campus. This year Daniel is hoping to see more people get involved, whether that be colouring their hair, wearing a wig or shaving their heads, all in aid of awareness.

“I am fully aware that there are many worthwhile causes to support, particularly in light of the fires and droughts but I would just like to see people happily getting involved in activities that are inconsideration of others,” he said.

“All struggles, successes, events and people shape your outlook in some way. I think Flo’s story becomes a reference point in our lives to look back on and give thanks to God that she was healed and that we have been given more time with her.”