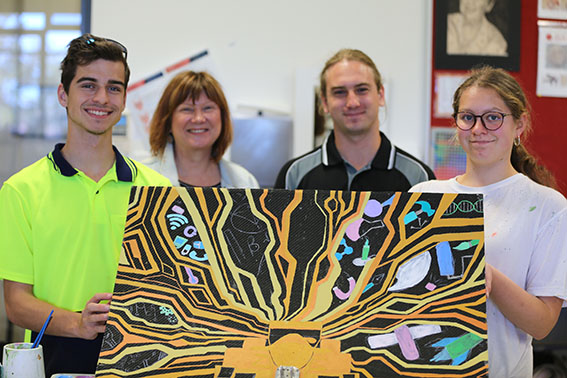 St Stephen’s School Class of 2016 alumni Dylan Holland is the Curtin Motorsport team’s business director and was keen to enlist the creativity of students for the project ahead of the big race.

He worked alongside Year 12s William Boutle and Adam Fletcher, and Year 9 Emily Richards to design and create the rear wing element of the Curtin Motorsport team’s 2020 race car.

“The team thought it would be a great idea to collaborate with the community to paint our aerodynamics package,” Mr Holland said.

“St Stephen’s was the first to reach out and show interest in collaborating, so we gave the students the largest element on the car – the first rear wing,” he said.

The trio of students, with a passion for engineering, art and cars were in awe of the project and worked enthusiastically with limited time to design and create the artwork.

St Stephen’s School Design and Visual Art teacher Bronwyn Schultz said the project was a fantastic chance for students to work on a community project.

“Students had to practically engage with the community on a real client project – using their design process, painting skills and working as a design team,” Mrs Schultz said.

“It was a very fast process without much lead time. The students were a little overawed but worked collaboratively and relied on their knowledge of the design process to brainstorm and develop a design,” she said.

“They worked and engaged with real clients, used their learning in a real situation and applied their skills to a different context.”

Students spent two days completing the project, the first day involved planning and design and the second was spent painting the artwork.

“The students were under pressure but they performed excellently to produce a design that complemented the car’s aesthetics and communicated the STEAM approach they aimed for,” Mrs Schultz said.

The Curtin Motorsport team is a co-curricular program that aims to provide university students with the opportunity to gain firsthand engineering and business experience, which involves the development of a formula-style race car to compete in the Formula SAE series.

The FS West race will be hosted by Curtin Motorsport Team, ECU Racing and UWA Motorsport at Wanneroo Raceway on December 1.