Come on a magic carpet ride 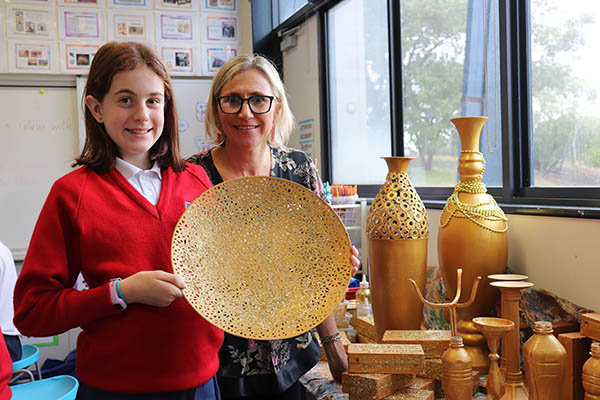 Primary students from Years 3-6 at the Carramar campus and Years 5 and 6 at the Duncraig campus have been rehearsing for months to ensure their performance is“shining, shimmering, splendid”.

Production Director Mrs Alison Hignett has been impressed by the calibre and enthusiasm of young talent on show.

“Working with young people and witnessing their fire for the Performing Arts ignite at such a young age, is one of the great privileges of my job,” she said.

“Aladdin JR. is a unique treatment of a much-loved classic, bringing the tale to the stage in an enthralling context. There’s still plenty of songs and characters that you know and love, as well as some new ones that you haven’t met before.”

Mrs Hignett said the production has offered cross-curricular opportunities for all, with Primary Art classes and after school production clubs creating glistening props and the technical team of secondary students learning about behind-the-scenes requirements of producing a seamless show.

“We have put extra effort into transforming the Duncraig Theatre to set the scene, with intricate steelworks under the stage, exciting use of multimedia, and clever lighting techniques.”

“Each campus also has its own cast giving more students time to shine on stage. Throughout the process of working on Aladdin JR. our students have developed creative self-expression, confidence, collaboration, teamwork, focus, discipline and problem-solving skills.”

St Stephen’s School Principal Mrs Donella Beare said that the biennial Primary Production was always popular with the parents and the wider community.

“The shows are always a hit as we get to see our young stars on stage,” Mrs Beare said. “The Primary students always bring such dedication and enthusiasm to their roles, which adds to the audience’s delight”.

So, come along and enjoy a visit to the fabled city of Agrabah. St Stephen’s School Primary Production of Aladdin JR will take to the stage on the following dates:

·     Duncraig: Matinee on Monday 23 August at 1pm and evening shows on Wednesday 25 to Friday 27 August from 6.45pm. Tickets are $18 at https://events.humanitix.com/dunaladdinjr

·     Carramar: Matinee on Monday 6 September at 1pm and evening shows Wednesday 8 to Friday 10 September from 6.45pm. Tickets are $18 at https://events.humanitix.com/caraladdinjr