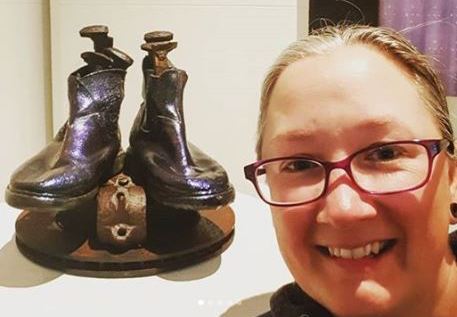 Duncraig Teaching Artist Claire Davenhall is always busy but this year has been particularly eventful as she exhibits her work at 15 exhibitions both locally and overseas.

Specialising in sculptural works but adept across all mediums, Claire’s pieces always tell a story – one of many reasons she is in demand around the world.

The year started with a feature in Tiny Sketchbooks with Brooklyn Art Gallery that has been touring in London, Paris and New York and a series of ant-inspired artworks for the A4 Art Australia in Victoria.

She has had pieces in several charity auctions including the Help the Homeless Art Auction and Togetherness at the Old Customs House in Fremantle, which raised funds for the Leukaemia Foundation, and featured at the Minnawarra and Wanneroo Art Awards.

Last week wrapped up Claire’s showcase at the Hearsay Exhibition, Sculpture at the Gaol in NSW and her involvement in All Washed Up at Yanchep Lagoon, yet just as she was starting to pack up, she was featured at Between the Sheets 2019, an exhibition of almost 60 artist’s books at Gallery Central.

Looking ahead to the rest of 2019, Claire’s work will be on show at the Castaways Sculpture Awards for the 10th consecutive year on the Rockingham Foreshore, opening on October 26.

She will have a piece called ‘Ammonite Anomaly’ on show at Sculpture on the Scarp in early November.

Finally, her work ‘Gorgeous Light’, which takes inspiration from Karijini National Park, will be available for viewing at London’s Oxo Gallery at the A Letter in Mind – Making Light Work display.

How lucky we are to have so much talent amongst us! Well done Claire.